When the Waves Crash All Around Me

Posted by Becky Daye on September 08, 2022 in Uncategorized | 2 Comments 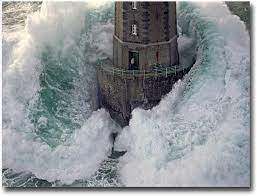 I was at the doctor’s office the other day, a recurring theme of late. I have had some health issues that seem to be the result of lousy genetics. My parents passed on an incredible legacy of faith to me for which I am eternally grateful, but cancer and heart issues are rampant in my family history (to be clear, my current issues are not serious!). As I was talking with my doctor about all of it, I pointed out the picture on the wall, one of my all time favorites of a man standing on a lighthouse with waves crashing all around him. If I could describe my life for the past several years, this would be it.

I can’t determine the waves that crash around me. Sometimes they feel relentless and out of control. Yet I have felt safe and secure through it all, because my hope is not in controlling the waves or positioning myself so that they can’t crash over me. Instead, my hope is outside of myself, in the Creator of the waves and the One who is in control of all of it.

I have learned in a deeper way what it means to depend on the Lord. I don’t know how I would have been able to stand up amidst the trials and difficulties without Him. He has proven to be my Rock and my Refuge, my Sustainer and my Salvation.

What waves are crashing over you today? Do you have a hope outside of yourself, a steady and secure foundation? One of the greatest lies is that we are meant to handle life on our own. We try so hard, yet inevitably fail, because we were never meant to walk alone. Trusting in the Lord is the single best decision that I make every single day. He has never failed me!

It was no mistake that the picture was on the wall, just as it was no mistake that I heard the song by Ryan Stevenson “In the Eye of the Storm” later the same day. That song was my theme song during the last season of struggle that ended with a church split and my Mom’s passing. God has ways of reminding us that He sees us and He is with us.

I know for sure that the waves will continue to crash, but I also know the One who will hold me fast.