He sat on the old, comfy recliner and I sat on his knee.

I will never forget my Daddy’s patience with me as he taught me to spell “Rebekah” when he had hoped to teach me to spell “Lance”. He never got the boy that he hoped for, so I slipped into the role of tomboy. As a result, we have always been close. 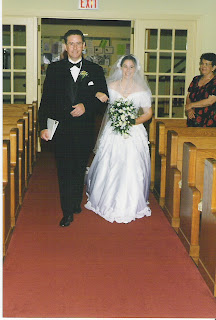 There are countless memories that I have of my Daddy. Playing in the snow and gasping as he flipped completely over on his sled. Waving to him while he mowed the lawn on the big, red riding lawn mower. The time he had poison ivy so bad that my mom had to preach for him.

As I grew older, he was not only my favorite teacher, he was also my confidante. The closet in my bedroom had a secret door that connected to his office and every once in awhile, I would sneak in and hide under his desk to surprise him.

We watched football together and when we weren’t watching it, we would be talking about plays and teams and stats. He took me to violin lessons- over the mountains and past the hubcap farm. We would laugh around the dinner table and sing around the piano.

It has been nearly a year since I have seen him, but it has been much longer than that since I have felt the closeness that we always had. He has been drifting away from us for a long time. It started slowly. He would forget someone’s name or he would lose his train of thought while he was preaching.

We thought it was old age.

But then he started to forget more things and he was becoming agitated and anxious. My mom supported him in his decision to retire from ministry- something he claimed he would never do! We were all there to celebrate his life and his faithful service to the Lord.

It was after he retired that it became obvious- his forgetfulness was not simply caused by old age. He would forget where we lived or who my kids were. Our phone conversations morphed from long discussions about life and scripture to fragmented discussions about the weather. I began to mourn the loss of him.

Then one night, my Mama called and told me that he had forgotten which way to turn when he was driving home from church. This was startling as he had grown up in that place- he knew it like the back of his hand. It was one of the harder decisions to make, but we took away the keys to the car.

The years were not kind and they were taking a toll on our Mom. We all lived in different states- Kansas, Virginia, Pennsylvania and Connecticut. And then my sister and her family moved to Georgia and my family moved to New York. We prayed and cried and we supported our mom as she made the decision to move to Kansas to be close to my oldest sister.

This was nearly two years ago. Our Daddy’s health has continued to decline and there have been several trips to the hospital over these years. We made the hard decision to move him to a nursing home last Fall.

But with every hard decision, we have seen the faithfulness of God. He has given each one of us the strength to endure and to be strong for each other. We have cried buckets of tears and we have prayed thousands of prayers.

We are stuck in an unexpected in-between. In between the vibrant, God-honoring life that our Daddy led and the hope of life eternal. In between our memories of a strong man and his inevitable death.

It is not how any of us expected the last years of his life to be. He thought that he would be in the pulpit until his dying day. He vowed never to live anywhere but Pennsylvania. He visited countless people in nursing homes and claimed that he would never live in one.

This in-between is heart wrenching when I allow my thoughts to dwell on these things. But then God lovingly lifts my chin and wipes my tears. He reminds me of the gift that I have been given in having a Daddy who has so faithfully pointed me to Jesus. I can’t hear a hymn without hearing my Daddy singing it. I read the Bible and I can hear my Daddy quoting it or sharing a lesson that he learned from it. He has impacted my life more than any other person and this impact will continue long after he is gone.

When he held Gibson, I rejoiced in believing that he had met all of his grandkids. But last year when I saw him, my heart broke a little with the knowledge that I might be carrying another grandbaby and it was very possible that he would not meet this little one.

God has been gracious!

Tomorrow, I will get on a plane with my girls and my Daddy will meet his last grandchild. He has once again been in the hospital and this could very well be the last time that I see him on this earth.

But along with the sorrow, I find myself rejoicing! For the past several years, I have cried nearly every time I have sung “It is Well”. It is THE song that reminds me of my Daddy. I can hear my harmony echoing his melody. The final verse is the one that brings me to tears as I imagine the moment when my Daddy’s faith shall be sight.

“And Lord haste the day when my faith shall be sight
The clouds be rolled back as a scroll.
The trump shall resound, and the Lord shall descend,
even so, it is well with my soul.” 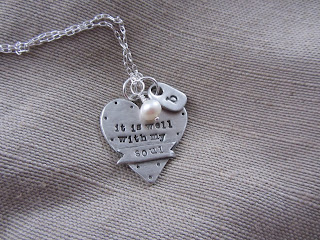 I am sure that there will be plenty of tears over these next few days. But there will also be great joy, because very soon my Daddy, fully restored and rejoicing in the presence of His Savior, will hear the words,
“Well done, my good and faithful servant.” (Matthew 25:21)
Last night, I finished reading “The In-Between” by Jeff Goins. It is a beautiful reminder to fully embrace the moments that might seem meaningless or mundane. Reading this book was timely as I prepare to see my Daddy. My heart’s desire is that I will not regret what we have lost, but rather rejoice in all of the blessings. You can get a copy of Jeff’s book here.